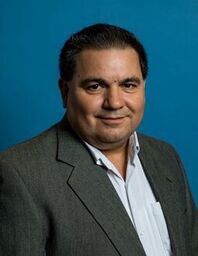 I have been a member of this union for twenty plus years.  In 1986 I was hired by General Dynamics as an aircraft assembler in Department 141. I later worked in 148, 140 and eventually went back to 141 where Lockheed Martin laid me off in 1994. As a displaced defense worker I was able to secure funding to further my education. I received an Associates Degree in Applied Science from Hill College in 1996. The Boeing Company in Irving, Texas hired me as an Electronic Technician in 1997. I served as a trustee and a shop steward from 1997 through 2001 with local Lodge 2768. In December 2001 I was elected as president and chief steward where I served in that capacity from January 2002 until January 31, 2007.  I joined the district staff on February 1, 2007 as a business representative. In January of 2015 I was permanently relocated to Corpus Christi to service all of South Texas. My family and I have thoroughly enjoyed our move to Corpus and are very excited to make Corpus our forever home.

I look forward to working with all of our membership and I am honored to serve the membership of the IAMAW and I vow to always be a voice for the membership. If you have any questions or concerns please feel free to call me at 817-919-7959 or e-mail me at joealviar@776iam.org.