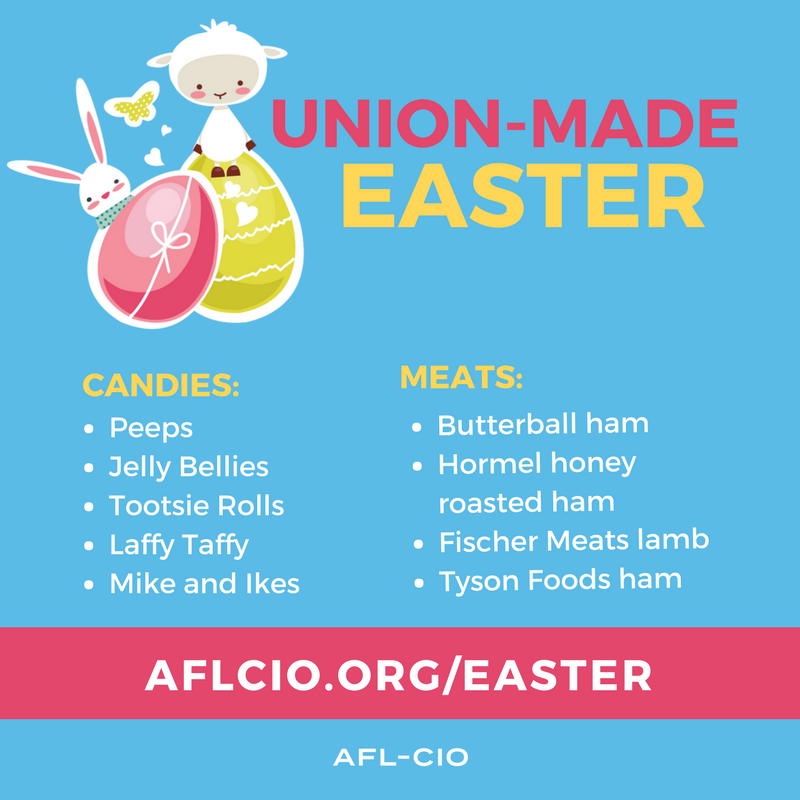 Here is a list of union-made in America treats to fill an Easter basket and your holiday dinner table brought to you by the Los Angeles County Federation of Labor’s resource site, Labor 411.

And don’t forget to pick up a union-prepared Easter ham or lamb:

If you’re feeling like doing a little egg dyeing, try these:

This year, Equal Pay Day is on April 2, 2019. Equal Pay Day represents on average how far into the year a woman must work to earn what a man earned in 2018. The wage gap is even greater for women of color. The gender pay gap hurts working families and our economy

“Wage disparity between men and women is an issue that we must all fight to eliminate,” said Machinists Union International President Bob Martinez. “The best way to fight wage discrimination is to join in union. The IAM is committed to raise awareness and help close the gender pay gap.”

IAM members play a major role in highlighting these disparities in our communities. And this week, the IAM Women’s Conference to discuss economic growth, political stability, and social transformation. The theme of this year’s conference is “Women Rising: Unite the Fight.”

READ: Women can close the pay gap by forming unions The Hill

The National Women’s Law Center has information and resources to raise awareness about how all women experience the wage gap.

Congress can take action by passing the Paycheck Fairness Act, a bill to address loopholes in the Equal Pay Act of 1963, ensuring that employers pay women and men equally for equal work.

If you believe all women deserve to be paid equally and recognized for their contribution to the national economy and to their communities, please TAKE ACTION!

We are excited to announce the Representatives for EBS will be on site at Lockheed Martin -Fort Worth for two weeks starting Monday, March 18th. They are bringing in some new information and brand new options for you – our members. They will set up all payments to be auto-deducted so it is super easy to enroll!

If you want Machinists Custom Choice to come to your work site, please contact your Business Representative.